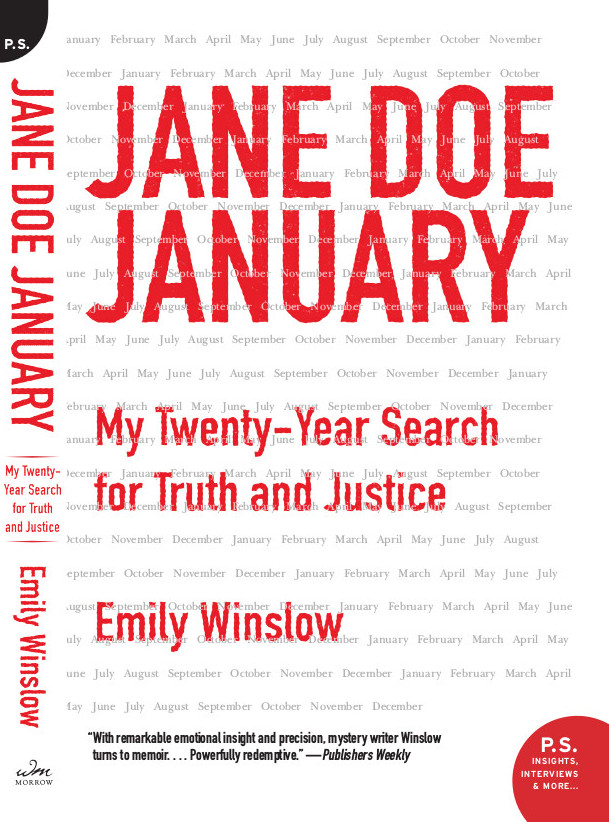 from William Morrow, a division of HarperCollins
Ebook and Hardcover May 24th 2016; Paperback August 29th 2017 (USA/Can), 5th October 2017 (UK); and from Shanghai Translation Publishing House in China, May 2019

BUY NOW
REVIEWS
BACK TO THE BOOK
Emily Winslow was a young drama student at an elite conservatory in Pittsburgh when she was brutally raped on a January night in 1992. In 2013 she is a happily married crime novelist and mother of two living in Cambridge, England when a man is arrested in New York City.

Emily Winslow was a young drama student at an elite conservatory in Pittsburgh when she was brutally raped on a January night in 1992. In 2013 she is a happily married crime novelist and mother of two living in Cambridge, England when a man is arrested in New York City. His DNA, recorded in the FBI’s criminal database because of an old drug conviction, had been matched to evidence from a different 1992 rape similar to her own. The victims, from January and November of the same long-ago year, are kept anonymous in the press. This is the story of Jane Doe January.

For years Winslow has longed to face her attacker. Highly inquisitive and restless for answers, she turns her career as a crime writer into a personal investigation — she delves into his past, reconnects with the detectives of her case, and works with prosecutors in the months leading to trial. While preparing to testify back in Pennsylvania for the crime committed against her two decades prior, she’s pulled between two very different worlds: a hard-boiled American drama of intense detectives and legal bureaucracy, and her rarified new world in Cambridge, where the university’s rituals and pervasive formality are both a comfort and a challenge.

Jane Doe January is the intimate memoir of a woman whose traumatic past is catching up with her. In her first work of nonfiction, Winslow vividly recounts her long quest to see her case resolved, giving way to a strikingly honest narrative about the surprise possibility of justice after twenty years.

The original detective from the case, William Valenta, vouches for the truthfulness of this account. He says that Jane Doe January “should be required reading for any person who is in a position to interact with victims of crimes.”

Internationally-best-selling suspense author Sophie Hannah says, “Jane Doe January is one of the most gripping memoirs I’ve ever read. With a shocking twist that rivals the best that fiction has to offer, this book is a triumph of heart over unbearable hurt. Everyone should read it.”

Jealousy is second. The other victim is going to get it all: a solemn courtroom, a sympathetic jury, an avenging judge. For more than twenty years, that's what I've wanted: to get to say what happened, to be who he's punished for. Now she gets the detectives who need her to prove their case; she gets the attorneys who need her to perform on the stand. She matters. I'm still the beggar I've been for two decades, calling the police every couple of years to ask them to look again; always talking to new detectives because none of them stay; always having to explain who I am, explain the case, because no one remembers, except for me. And her. And him.

The New York Times: “Meticulously constructed and ultimately terrifying…Her story reveals a stark, maddening ­reality: that rape victims must often become their own legal advocates if they want an ­opportunity for retribution.”

Library Journal (starred review): “This important chronicle answers the question, does it serve justice to put a man on trial for a 20-year-old crime?…This eloquent memoir will be appreciated by anyone interested in cold case investigations and victim advocacy as well as true crime fans.” 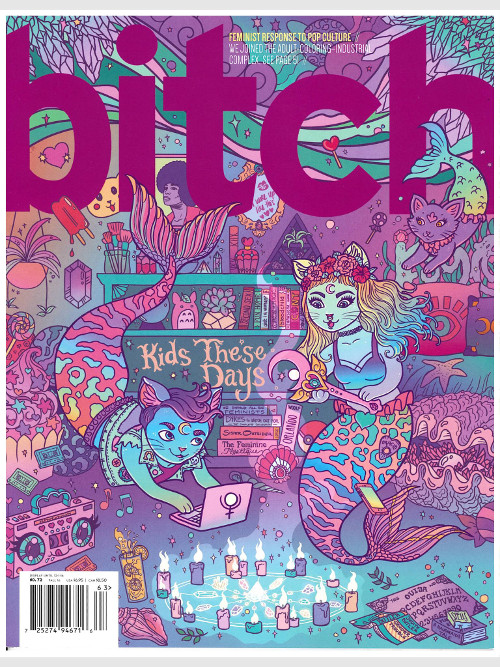 Bitch magazine: “An invaluable read for anyone interested in social justice.” 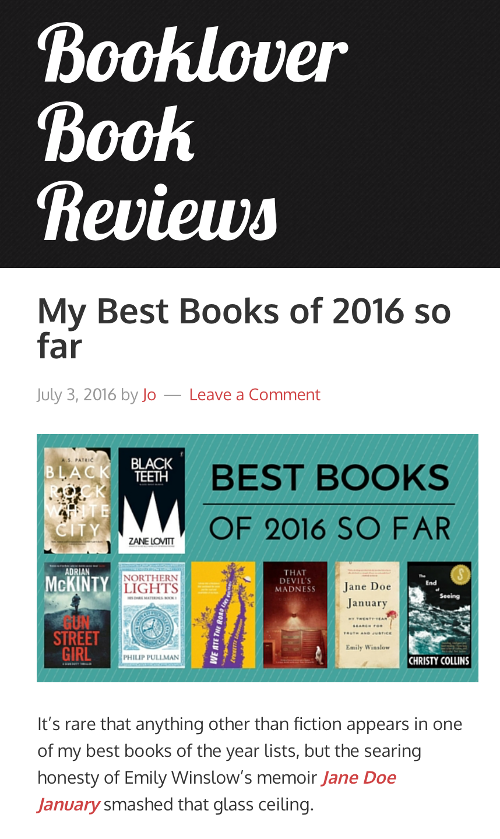 Booklover Book Reviews: “There is an immediate sense of intimacy and compelling tension as we ride shotgun with Winslow from the moment she was told the police had found her rapist…While the crime is the catalyst, the story is the act of ‘living’ – the myriad of things that influence us and fuel our journey, and the gifts there for the taking should we invest effort into better understanding ourselves and others.” 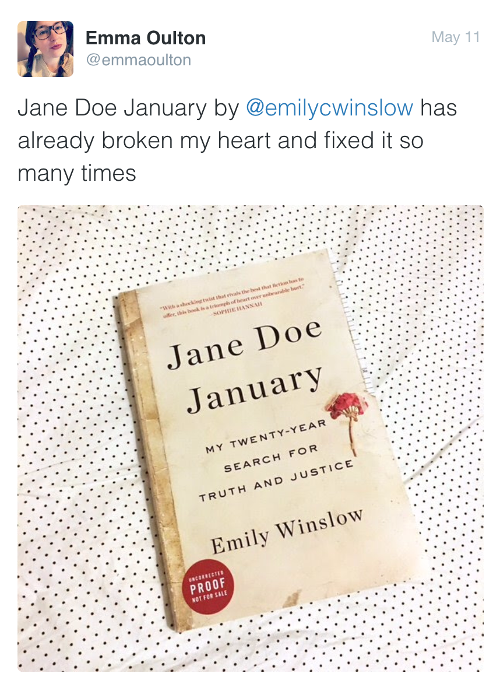 The Eggplant Emoji’s Feminist Bookshelf: “Hauntingly emotional and startlingly rational… JANE DOE JANUARY will break your heart and mend it again—and it will do that over and over. My copy is already dog-eared from my wanting to bookmark Winslow’s most beautiful, wise or heartbreaking quotes; this is a book I will flick back to.” 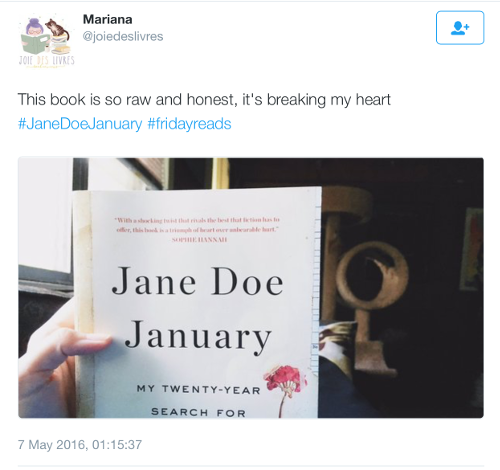 Joie Des Livres Book Reviews: “JANE DOE JANUARY is a book I would recommend to everyone. It will break your heart and give you hope, all while making you really angry and disappointed and sad. It can’t get any more honest than that.”

“With its multiple compelling story arcs, Jane Doe January does certainly discuss issues that, sadly, are all-too-relatable for many. Winslow does so with honesty, determination, and grace, making her memoir a fascinating and emotional ride bound to inspire important conversations.” —Stephanie Topacio Long for Bustle

“A terrible story brilliantly told…with fluidity and wit and insight along with horror and outrage as they’re called for, as they are until the stunningly ironic end…Crystalline emotional clarity on every page.” —George Ernsberger for the Ellenville Shawangunk Journal and Sullivan County Democrat

“The book is a powerful testament to the efforts of police and lawyers to ensure a rapist is punished for his crimes. It is also a thorough investigation of the legal landscape for such cases. But most of all, “Jane Doe January” is a book about resilience, individual agency, and the value of friendship and kindness.” —Rob Cline for The Cedar Rapids Gazette

“One of the trends in contemporary crime fiction is the movement away from emphasizing the puzzle of solving the crime to the shattering effect of transgressive behavior on the community itself. Both The Red Parts and Jane Doe January take the examination of the effect of crime to an even greater level of magnification—the impact on two sensitive, finely articulated consciousnesses…The cumulative effect is tremendously powerful, and challenges received attitudes about “victims” and “actors” (a technical law enforcement term for criminals) in crime narratives. In the end it’s a story of survival and, indeed, triumph.” —Jamie Agnew for Aunt Agatha’s Bookstore

“This memoir shines a spotlight on the horrific nature of rape and the ramifications for the lives left in its wake. Written with unflinching honesty, this is a book that will help many other victims.” —Bolo Books

“Complex and multilayered…It provides a considerable amount of material for discussion and debate and continues to raise important concerns regarding how American culture continues to tolerate and excuse violence against women.” —Elizabeth A. Richter for The Readers Rag

“One very honest woman’s story, told in such a way that it almost reads as a suspense legal thriller…Truly intimate…Highly recommended.” —Marni Graff for Auntie M Writes

“Winslow’s memoir is a testament to survival, overcoming a horrific assault then being brave enough to bring her story to light. But not just as a victim. Like a true crime novelist Winslow fleshes out the story by delving into Fryar’s past, beginning her own investigation along with talking to the detectives and prosecutors who handled the case to find answers to complete the healing process.” —Bookbaggers

“It took a brave person to write this powerful and gut-wrenching story. Emily Winslow felt compelled to share her experience and this is a memoir that won’t soon be forgotten by those who read it.” —Night Owl Reviews

“Very powerful, because it allows people to think how they would have reacted. It is written in almost a diary form as Winslow recounts her quest to seek justice in a very open and honest way. People should read this memoir to get invaluable insight into the mind and heart of a victim.” —Elise Cooper for Working Mother

“Jane Doe January is a true account of justice denied to a crime victim, but it is also a journal of a courageous woman’s story of surviving. With candor, Emily recounts the trauma faced by sexual assault victims which extends far beyond the attack itself.” —Regina M. Angeli for the Iron Mountain Daily News

“This is a memoir full of courage….Reading this, what is floating on our hearts is not only the desire for justice, but also respect and empathy.” Beijing News (Google translate)

“With a shocking twist that rivals the best that fiction has to offer, this book is a triumph of heart over unbearable hurt. Everyone should read it.”
—Sophie Hannah, author of The Monogram Murders

“A powerful memoir of survival from a great writer.”
—Lisa Gardner, author of Crash and Burn

“This riveting, courageous story would be unbelievable if it weren’t so heartbreakingly true. Told in elegant-yet-unflinching style by a writer of considerable skill, JANE DOE JANUARY is one of the most compelling memoirs you will ever read.”
—Brad Parks, author of The Fraud

“This factual, fascinating and forensically cool memoir lays out the legal process almost as a police procedural. Then each time Winslow puts aside her detachment to express rage, contempt, impatience, love and gratitude, the memoir takes on a devastating emotional white heat. JANE DOE JANUARY had me gripped and furious.”
—Eliza Graham, author of The One I Was

“The sheer bravery of the memoir alongside the lyrical writing style make it a compelling and ultimately uplifting read.”
—Kate Rhodes, author of The Winter Foundlings

“In JANE DOE JANUARY, Emily Winslow has created a new genre. This book unwinds like a page-turning mystery novel while, with gut-wrenching perspective, it embodies the most elegant of personal journalism. I’ve never read anything like it.”
—Julia Heaberlin, author of Black-Eyed Susans

“Winslow’s precision and clarity disallow us the easy exit of ‘I can’t imagine…’ You don’t have to imagine. She’s drawn an eloquent, exacting map of what it feels like to dangle on the whims of justice.”
—Jamie Mason, author of Monday’s Lie

“JANE DOE JANUARY is an extraordinary memoir, written with the skill of a master novelist in beautiful, haunting prose. This story should prompt serious discussion and is one of the most important memoirs on sexual assault you will ever read. Her courage in telling it is breathtaking.”
—Allison Leotta, author of A Good Killing and a former sex-crimes prosecutor for Washington DC

“JANE DOE JANUARY should be required reading for any person who is in a position to interact with victims of crimes.”
—Retired Commander Bill Valenta of the Pittsburgh Police, the original detective from the case

From a selection of Amazon reviews:

“as far from the lurid ‘misery memoir’ as you can get—an intelligent, well written, brutally honest narrative that isn’t afraid of asking uncomfortable questions”

“candid and conversational, while meticulous and unsparing”